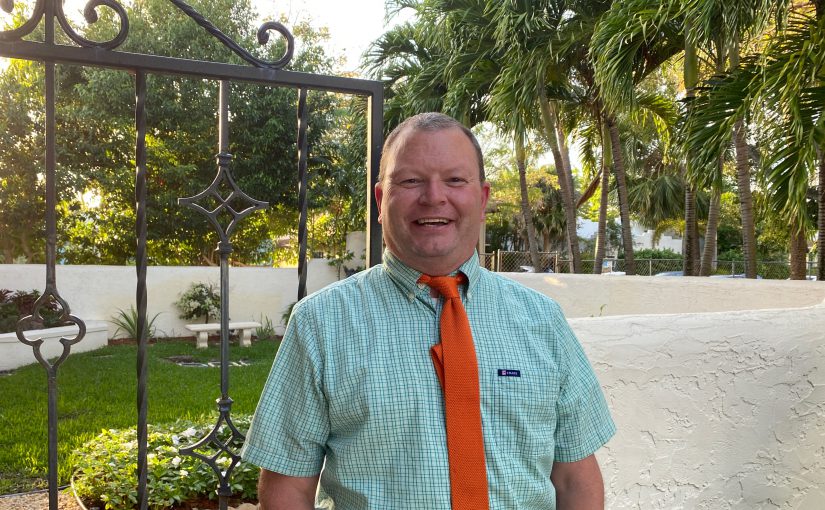 In 2013, Eric Salomonsson sought spiritual nourishment and healing. He found it at St. Andrew’s.

“After my father’s passing, I realized I wanted more stability in my life” says the jovial Worcester, Massachusetts native and social science teacher at North Broward Preparatory School in Coconut Creek.

He discovered St. Andrew’s through a Google search. “The church was celebrating its Centennial and this impressed me. Most of the other churches here were younger than me,” he laughs. “St. Andrew’s sense of tradition, its deep roots in the community, and architecture all appealed to me.”

Seven years later, he’s a regular at the Sunday, 7:30 a.m. service. He also served one term on the church Vestry, and after a break, recently commenced a second term, this time as Junior Warden, where he helps maintain the church building and grounds. It’s a natural fit since he worked as a landscaper for 25 years before he began teaching. “I was in my mid-40s and wanted a change, and besides my undergraduate degree is in history, so I went ahead and got my masters,” explains Eric.

Eric was involved in the Swedish-American Community while in Worcester and authored and co-authored three books on the city’s Swedish population, the largest concentration outside of Chicago. Although born in the U.S., about half his family still lives in Sweden and they take turns visiting each other, toggling between both countries. He also keeps his heritage alive in Florida, especially during the holidays, when he makes a mean glögg, a traditional Swedish beverage at Christmas time.

But we digress. Since joining St. Andrew’s he’s found an extended family.

“We’re an eclectic bunch here. And there’s a genuineness you don’t find at many places. No one’s putting on airs. That’s why I enjoy coming here,” says Eric. “I’ve made some really great friends.”

What is your favorite hymn? It’s a tie between “Jesus Lover of My Soul” and “Children of the Heavenly Father.”

Do you sing in the shower or your car? I definitely sing in my car since I have a 35-minute commute in the morning!

What is something not many people know about you? I worked in landscaping for 25 years before I became a teacher.

How would you describe St. Andrew’s in one word or phrase? Eclectic.