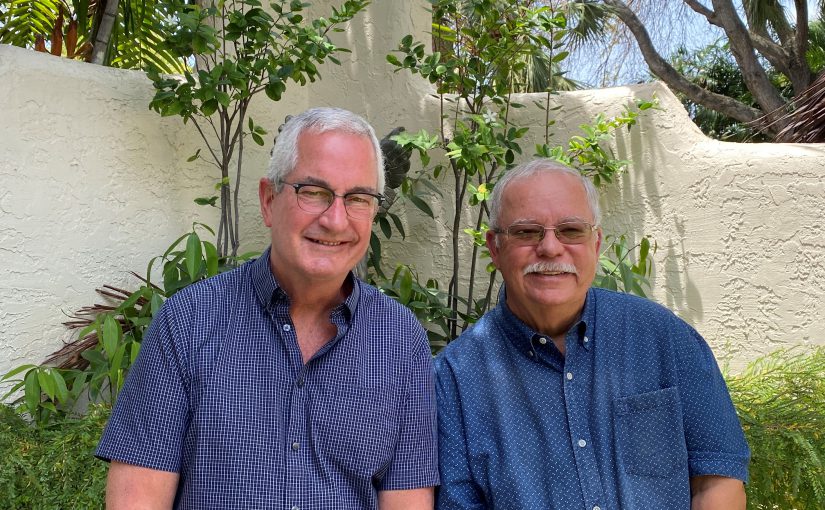 May is a significant month for Joe Kolb and Michael Hoagland. Joe’s birthday is May 19, and their anniversary is the 12th.

“This year we’re celebrating 44 years together,” says Michael. “We met at a gathering of folks looking to start a gay phone hotline service, which became The Gay Hotline, in the Washington, D.C. area.”

“A shy friend of mine asked me to go with him,” says Joe. “Michael was there, and the rest is history.”

The couple remained involved with The Gay Hotline for a number of years as they settled into their home in D.C.’s Palisades neighborhood. “The hotline provided general information and support for younger people navigating the coming out process,” says Michael.

As their lives together blossomed, so did their careers. Joe, a graphic designer with a degree from the Maryland Institute of Art, worked with several nonprofit associations and conferences, and Michael specialized in human resources in the nonprofit sector as well. In 2009, they purchased a condo in Lake Worth’s Lake Osbourne neighborhood for Michael’s mother, but when she decided to stay up North, Joe and Michael made it their vacation home. In 2014, they officially retired, making Lake Osbourne a permanent home and St. Andrew’s their spiritual home.

Raised Roman Catholic, as adults they found themselves attending Episcopal Churches and haven’t looked back. “We liked that we were immediately recognized as a gay couple when we walked into St.  Patrick’s in D.C.,” says Joe. “And we had the same feeling here at St. Andrew’s.”

Joe and Michael are active members of St. Andrew’s. Both have volunteered their time and talent to several church initiatives. Joe designed the parish profile used during the Rector Search process. He’s also worked with Margot Emery and the special events committee to design communications for the Arts at St. Andrew’s programs, and served as Co-Convener of Integrity, St. Andrew’s LGBTQ ministry for a year and a half. Michael served on the Vestry for three years, including one as Junior Warden. He also chaired the search committee that nominated Rev. Cori Olson as St. Andrew’s new Rector. And you can also find them ushering for Sunday 10:00 a.m. services.

“Rev. Cori continues St. Andrew’s tradition as a welcoming parish,” says Michael. “I really enjoy her sermons—she speaks from the heart. We are blessed to have her as our spiritual leader!”

Joe agrees. “She’s very down to earth and authentic. If I needed spiritual guidance for an issue or problem, I’d be comfortable discussing it with her,” he says.

Beyond St. Andrew’s, what the couple’s secret for sustaining a 44-year relationship?

“Always show respect toward each other, fight fair, and address issues head on.”

What is your favorite hymn? Joe: “If It Be Your Will” by Leonard Cohen; Michael: “On Eagles Wings.”

What is something not many people know about you? Michael: Studied eight years to become a Catholic Priest but left several years before ordination. Joe: Designed the graphics used to explain the refurbishment of the Vietnam Veteran’s Memorial’s statues.

How would you describe St. Andrew’s in one word or phrase? Our spiritual home.