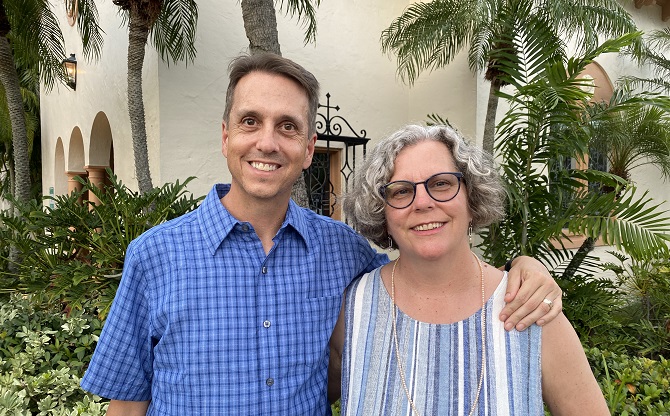 When you attend services at St. Andrew’s, you are bound to meet Drew and Lissie Bartlett. They’ve both quietly taken on a few key volunteer positions at the church. Drew is a welcoming presence as an usher on Saturdays at 4:30 p.m. while Lissie helps with the livestream of Sunday’s 10:00 a.m. service over YouTube, helming the cameras, scheduling volunteers, and making sure other technical aspects are in working order.

Relocating to Lake Worth Beach

Drew and Lissie joined St. Andrew’s about six months before the pandemic. They moved to downtown Lake Worth Beach during the summer of 2019 after Drew accepted a position with the South Florida Water Management District.

“We were drawn to Lake Worth Beach because it’s so culturally diverse and eclectic. There’s always something going on downtown with the different street festivals and events.” says Drew. They also appreciate the town’s convenience and walkability. On one of their strolls, they discovered St. Andrew’s. They eagerly joined the church and appreciate it’s laid-back, friendly vibe. “It’s super inclusive, open and diverse,” says Lissie. “People aren’t judge-y and catty.”

Drew practically grew up in the Episcopal Church. His father was an Episcopal priest and the rector of St. Bartholomew’s Church in Atlanta. “The sense of community and fellowship, plus the peace and reflection we get from the church is important to us,” says Lissie. “Rev. Cori’s sermons are incredible,” adds Drew. “She’s a great storyteller because she keeps you interested.”

The couple met while students at Georgia Institute of Technology (Georgia Tech). In fact, you could say that Lissie’s cat arranged their meeting. “We were neighbors but hadn’t met until I was out looking for my lost cat,” says Lissie. “Drew was around, and I asked for his help.” They started dating and eventually married in 1992.

While Drew earned his degree in industrial engineering, Lissie’s is in chemical engineering. She worked for the

Environmental Protection Agency permitting and cleaning up hazardous waste sites, and later formed her own freelance business designing websites. “I’m pretty much a free agent right now,” she says. “I do miss working with people, though, and crunching data!”

The Bartletts have two adult children, daughter Samantha and son Avery, and consider themselves “empty nesters.” They’re grateful they’ve found a new home and community in Lake Worth Beach and at St. Andrew’s.

“Everyone’s truly welcome here – it’s not just a saying,” says Lissie. “Rev. Cori even did a pop-up baptism at a service recently. Who does that? I thought it was really cool.”

5 Questions for Drew and Lissie Bartlett 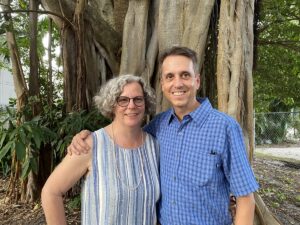 Do sing in the shower or in your car? We both sing in the car. Although Drew is more a of a “clapper”—he likes to keep rhythm.

What is something not many people know about you? Drew and a buddy toured the United States on motorcycles the summer between their junior and senior years of college. Lissie regularly serves as an election poll worker.

How would you describe St. Andrew’s in one word or phrase? Welcoming and relaxed.